Models that include Gross Weight Increase for take-off:

We use Loctite® AA 330™ adhesive to attach the Micro Vortex Generators. This is the same adhesive used by Boeing Aircraft Company for many aerospace applications. Our experience has been that only bird strikes produce sufficient force to knock off Vortex Generators in normal operations. 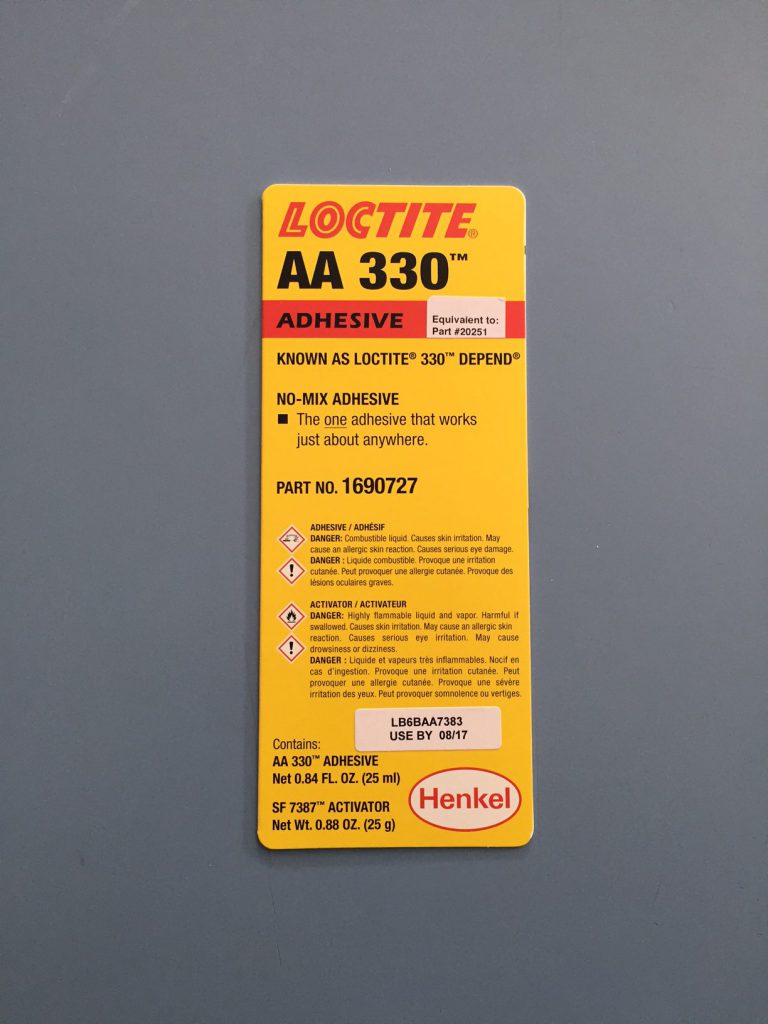 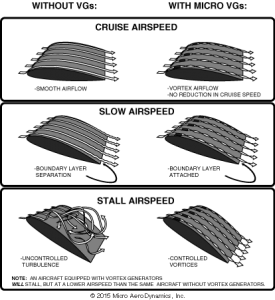 Installation using the provided illustrated installation manual can take as little as 6 hours and up to 14 hours depending on the number of surfaces on which the parts are installed, and how many total parts are in the kit for a specific aircraft model.

It will take your mechanic approximately 3 hours to install the templates on the aircraft and double check the measurements. The remainder of the time is gluing each Micro Vortex Generator in the cut-out of the template, and cleaning up any excess adhesive that may squeeze out under the base of the Micro VG when pressed in place. Some aircraft models also contain strakes which are installed with provided hardware.

Here is a video of an installation

The proper use of Template Placement Tool 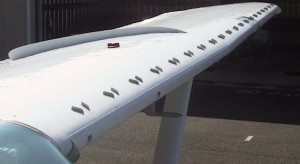 Micro Vortex Generator(s) can be installed directly on the landing light lens with the provided Loctite® AA 330™ adhesive. If it falls on the landing light lens frame, the Vortex Generator(s) may be moved LATERALLY the shortest distance necessary to clear the obstacle. The foot of the vortex generator may be trimmed, or shimmed as required as long as the blade remains intact.

Yes. We cannot, of course, test every possible combination of STCs for compatibility with our STC. However, our STC allows the installer to determine compatibility with other STCs on a given aircraft. The installer can perform an Operational Flight Check per FAR 91.407(b) after installation of the Micro VG Kit to determine if there are any adverse characteristics created by the installation of VGs along with another STC.

Glue the portion of the Micro Vortex Generator that falls directly on the Inspection Plate to the cover, without moving the part fore/aft. The rest of the VG will not be glued to the aircraft.

Ice does not form far enough aft of the leading edge to affect the Vortex Generators. We have confirmed this through extensive flight testing in severe icing conditions, per FAA flight testing requirements.

The only disadvantage is that the airplane wing is somewhat more difficult to wash. However, if sufficient care is taken this is only a minor difficulty, and is far outweighed by the safety and performance benefits.  Using a brush with long soft bristles works well.

Micro VGs and Strakes come "alodined" unless the pre-painted option is selected.  Alodine is a treatment stain that is applied to the extruded aluminum to close the pores. It is brownish-gold in color.

Look in the “note” section of the location drawing found in the back of the installation instructions for the official authorization to move the VG. You may move the Vortex Generator LATERALLY the shortest distance necessary to clear small obstacles, or you may file the foot of the vortex generator (leaving the blade intact) to fit over the rivet head.

We include a set of spare Micro Vortex Generators and Loctite® AA 330™ adhesive to replace any that are lost. This spares kit is to be kept with the airplane at all times. Replacement Spares Kits can be purchased. Contact Micro to order.

All Materials necessary for installation are included in the Micro Vortex Generator Kit, with the exception of a ladder for installing VGs on the tail, a roll of paper towels and bottle of isopropyl alcohol for cleaning the wing surface. If the kit includes strakes, then an electric drill and pop-riveting tool is also needed.

If your kit includes a Gross Weight Increase (GWI), or change in operation airspeeds, there are two options for installation.

OPTION 1: No Change in Performance

The vortex generators are installed on the aircraft, but the airspeed indicator is not changed, and the Pilot's Operation Handbook is not changed to reflect the improvement in performance.

The vortex generators are installed on the aircraft, the airspeed indicator is changed, and the Pilot's Operation Handbook is changed to reflect the improvement in performance.

No. We have flown a Baron with Dick Rutan at Edwards Air Force Base and used radar tracking to measure speed at different altitudes. The only conditions where we found a speed reduction was a 1 knot reduction in top speed at 12,000 ft. at full power, and no change in top speed at 75% power. There were no speed reductions at any other altitude. The small amount of drag created by the vortex generators is offset by a cleaner flow of air from the trailing edge of the wing.